The sound of a whistle from 30 yards away stopped Will in his tracks. He crouched in the grass — his dark eyes fixed on three black angus steers frozen in their tracks.

The steers warily eyed Will and slowly backed away, intimidated. The cattle had Will’s utter attention, but he didn’t move until the whistle blew again.

Then Will, a border collie with thick white collar, sprinted toward the cattle, making a wide loop and coming in behind them. The cattle, slow and clumsy, were outmatched. Not even their eyes could keep up with Will’s speed and agility.

Will’s cowboy, Bill Boyd of Chiloquin, Ore., blew the whistle again from across the arena and yelled gruffly from his saddle, “Sit.”

Will dropped again, still as a statue, waiting for the next command.

The scene played over and over again Saturday, with different dogs and different handlers at the 9-Mile Ranch Billy Hindman Memorial Herding Dog Trials in Touchet.

In their fifth year, the trials drew 60 contestants and even more dogs, said Tad Greener, manager of the Hindman Cattle Company, which sponsors the trial.

“We have handlers from California, Canada, Oregon, Idaho and Washington,” Greener said.

And although any dog can be entered, the vast majority of the herding dogs entered were black-and-white border collies like Will, a seasoned cow dog, and Leo, a 2-year-old owned by Loren Holmes of Red Bluff, Calif.

Holmes keeps 10 border collies at his small ranch, where he breeds and trains champion herding dogs. It’s a hobby he takes seriously.

“I got into it about 20 years ago,” said Holmes, who calls himself retired.

Hours of training herding dogs in the California sun have left Holmes with deeply tanned skin, set off by a snowy white mustache under a straw cowboy hat.

“It keeps me from getting old,” he laughs.

And he’s pretty darn good at it.

And as of March 1, Puzzel topped the U.S. Border Collie Handlers’ Association list in points earned. Holmes will take Puzzel, Leo and another of his dogs to compete in the national finals this year in Torrington, Wyo., in May.

Hindman has some of Holmes’ border collies that she competes with. But cattle dogs weren’t always welcome on her 15,000-acre spread seven miles east of the Wallula Junction.

“My father for years wouldn’t let any cattle dogs on the ranch,” Hindman said. “Then someone brought out a really good dog one time — and pretty soon he had one.”

When Shirley’s father, Billy, died in 2003, the herding dog trials were started as a memorial to him, she said.

For Hindman, the border collies are a tool she uses in Touchet and on the family’s cattle ranch in Elgin, Ore. — about 80 miles away.

“The trials are a hobby for me — they keep me from being a workaholic,” she said.

But each year Hindman and Greener look forward to the event. They spruce up the picturesque ranch, manicure the rolling green lawn overlooking the pens where the handlers — on horseback — use small triangle-shaped whistles and the power of their voice to help their dogs maneuver the cattle around obstacles and through gate panels placed in pastures.

Saturday, handlers had eight minutes to bring the cattle down from the upper pasture, maneuver them through a set of gates in place in the roadway, get them into a lower pasture, usher them around an obstacle and then through two gate panels set some 10 feet apart in the middle of the pasture.

There was no time to waste, said Boyd.

“You really have to keep the cattle moving and you take what you can get — there’s no time to try to repeat if you miss something,” he said.

Boyd and Will got through the course earning 87 out of a possible 135 points — fetching a first place in Saturday’s open class division.

“The course gave me a good run,” he said.

Robin Nuffer of Idaho and her dog Sue got second place and Holmes and Leo got third place. 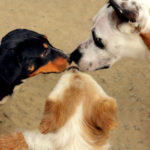