A Guide To Aggressive Behavior In Dogs

Are you just plain fed up with the aggressive dog behavior your pooch is displaying?  Join the crowd.  Aggressive behavior in dogs is the most serious dog behavior problem that you’ll face as a dog owner.

However, canine aggression is preventable if you understand why your dog develops aggressive behavior.  Read on to learn more about this common problem.

Your Dog’s Aggressive Nature Is Instinctive

Aggression is a valuable behavior in the wild.  A dog needs to be aggressive in order to hunt for its food.  It also needs to be able to defend its kill from other animals.  An aggressive dog also defends its territory and its mate.

In the centuries since dogs were domesticated, people have selectively bred most aggressive tendencies out of dogs, but a few do remain. And since dog do have sharp teeth capable of doing people serious harm, it’s necessary to recognize aggressive behavior in dogs and deal with it effectively.

This type of dog behavior is very easy to recognize.  You dog may react in one of two ways:

You dog will be so nervous and jumpy that he’ll startle at the slightest noise.Agitated behavior, including pacing around, barking and whining, and acting fidgety, is seen.

Or, on the other extreme, he’ll be very quiet, sitting in one place without moving, while staring hard at whatever it is he’s suspicious of — whether it’s a visitor or your unsuspecting mail carrier.

The main reason a dog is aggressive around strangers is because he’s not used to them.You’ll need to teach your dog that strangers aren’t necessarily bad.

Your dog may show canine aggression towards members of your family for two reasons.

The first reason is that your dog wants to protect something he possesses from a person he believes is a threat.This is referred to as “resource guarding”.

In the wild, only the dominant individual acts aggressively to guard resources.  So obviously, your dog thinks he’s the pack leader, not you, when he displays this kind of aggressive dog behavior.

The second reason is that he’s unhappy about how you, or somebody in the family, is treating him.

Discover How To Handle Aggression In Dogs

You don’t have to be at the mercy of your dog, and you shouldn’t be.  If your dog uses aggressive dog behavior to control you and get his way, this is a very unhealthy situation, as well as being potentially dangerous.  There are many emergency room visits every year because of dog bites.  You don’t want this happening to you or a member of your family, or anyone else your dog interacts with.

You can learn how to handle aggressive behavior in dogs.  You need a dog obedience course which includes a complete owner’s guide to rearing and training your dog to prevent canine aggression.  Be sure to read testimonials from other dog owners who have purchased the course to see how satisfied they are with the material.

Do yourself and your dog a favor and learn more about controlling aggression in dogs. 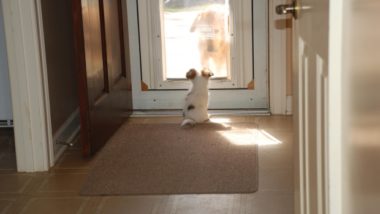 A Dog Trainer and His Duties

You Need To Know About Puppy Socialization, An Important Part Of Dog Training