Barking is as natural to a dog as talking is as natural to a human being. Trying to eliminate dog barking altogether would be like trying to stop someone to talk forever! It’s impossible and it’s not exactly a nice thing to do. But we have to admit, excessive barking (just like excessive talking) is totally irritating—not just to you but to your family, your hot neighbor, the children at play, the mailman, and every one else who can hear it.

Though barking shouldn’t be eliminated—after all, it’s very useful when your dog uses it for proper reasons like warning you, warding off trespassers, or telling you something of importance—it must be controlled. If you want to maintain peace in the neighborhood and between your neighbors, controlling your dog’s barking habits is important.

A lot of people—even dog owners—aren’t too aware that there are many ways to try and stop your dog from barking at whim.

These days, busy dog owners tend to run to these things called anti-barking collars. They seem to be the most convenient solution. What a lot of people find great about dog collars is that it seems to promise minimal supervision and maintenance. So far, there are basically three different kinds of anti-barking collars available in the market.

One is the sonar collar. Sonar collars are discreet things. Whenever the dog barks, it releases a sound with a certain frequency inaudible to humans but irritable to dogs. The idea is that they will associate the irritable sound as punishment to their incessant barking.

The second one is the citronella collar. Citronella collars spray a pungent scent. When the dog barks, they spray so that, similar to the sonar collar, the dog would find the scent as a punishment for their incessant barking. Although the device sounds promising, anecdotal reports state that a lot of dogs have already found a way to get around this collar.

One anecdotal report states that their dog would just keep on barking until the collar runs out of citronella. Then he’ll just go on barking for the rest of the day. Other dogs would bark and then sort of hold their breaths to avoid the smell and then bark again.

The third one is called the shock collar. This collar gets a lot of people iffy. It stops dog barking with electric shock. The strength level of the electric current can even be changed from 1 to 6; 6 being the highest and the one that stings the most.

Many people regard this collar as inhuman and condone it. Come to think of it no decent person would want to do that to their own child (or anyone they want to discipline for that matter) so doing it to their own pet sounds insane, illogical and altogether cruel as well. As much as possible, this kind of collar is avoided—and for good reason.

The best thing is still training—find out first why your dog barks the way it does. Take your dog to a veterinarian behaviorist. A veterian behaviorist basically observes a dog’s environment and circumstances to figure out what exactly triggers their socially unacceptable behavior. Then they find solutions to eliminate the behavior with proper training methods based on their findings.

Some reasons as to why a dog would bark are things like boredom (they might have too much time in their paws with nothing to spend it with) or frustration (perhaps they’re being bullied by another dog in the family or by the people around them) to name two.

You can always call a vet behaviorist to help you find out your dog’s behavior problems. He or she can also give you a solution. In extreme cases, they might suggest an anti-barking collar but that should be used side by side with proper training techniques.

Barking dogs are just sometimes extremely bored with so much energy to waste. Provide them with physical activities like walks, catch, and play time with other dogs. If you don’t have time, then hire a dog walker or take it to a doggie day care. When left alone with nothing to do, dogs feel bored and lonely just like humans do and they will do just about anything to release some energy or catch your attention.

You can also use other tricks like the “QUIET” command, which you will have to implement whenever he barks senselessly. If you’ve already established yourself as the alpha of your “pack”, then it won’t take much trouble to teach this. If the barking is too much of a nuisance already, then a collar might work as a temporary solution BUT always follow it up with behavior training.

The sonar collar is most recommended as it is not just humane, but more efficient than the two as well. Always follw-up anti-barking collars with proper obedience training. Training your dog to respond to obedience signals is still the best and lasting way to curb dog barking behavior but still maintain his freedom to do what he naturally does.

Know The Different Life Stages Of A Boxer Puppy 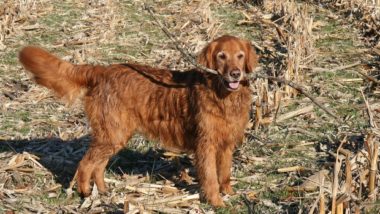 Essential Dog Training for All Dogs