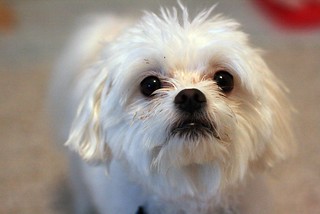 It really is funny “human” behavior – to use examples of their dog’s bad conduct to somehow enhance your view of their parenting skills and patience. How many stories have you heard about the dog who, when miffed by its owners’ absence, left a “gift” of the most unpleasant kind?

The real truth is – he or she (the dog, that is) didn’t do it out of spite. Canines, even though we often treat them as such, just aren’t people. Humans are the only animals that experience the feelings of “spite,” “vengeance,” and “retaliation.”

I’m not saying that dogs don’t experience emotions – we all know better than that. But almost everyone will agree that dogs aren’t the best at planning – they live entirely in the moment – which is an accomplishment humans can only try to emulate. And, it’s a difference we need to keep reminding ourselves about.

It’s best to correct a dog for bad behavior when you catch him in the act. Otherwise, the dog may associate the correction with whatever he is doing “right now”. Revisiting the crime scene doesn’t do much good. The dog won’t remember doing the deed, and screaming at the dog when you discover the mess teaches the dog that “finding a mess” is a bad, bad thing.

Dog logic will take over, and he will figure out a way to “hide” the mess (to avoid the yelling) rather than not making a mess in the first place. It’s just the way a dog thinks.

Rather than accusing your dog of being “spiteful” when you find messes after you’ve been gone, you need to reconsider  what’s really happening. Your dog isn’t expressing anger because you went away – he’s telling you he’s nervous and uncertain when you’re not there.

Remember, dogs are pack animals. Since you are the leader of the pack – as you should be! – then, for his entire life your dog is just a juvenile member within the pack. Your dog I basically a “kid” experiencing separation anxiety. He doesn’t know what to do when the pack leader isn’t there to lead.

Now that we realize, somewhat, what your dog is thinking, we can use that to produce the kind of behavior we want.

A recommended way to lessen many of the causes for  your dog’s anxiety is called Crate Training. It’s helpful for you as well 🙂

A crate, or cage, is society’s way to mimic the safety of a cave or den. Your dog will feel safe and secure in his crate, like he would in a den. That means – the crate should be big enough to allow your dog to stand up, turn around, and lie down. And, that’s it.

Even if you are claustrophobic, don’t assume your dog will be too. He loves feeling safe, sheltered and protected. He likes not having to check out every little noise or movement for danger. He’s content with having no decisions to make.

Never let a dog make a decision – he will choose wrong 🙂

Some folks resist the notion of a crate because they think it’s being mean to the dog. And, of course, some dogs really don’t need a crate past puppyhood. But, if your dog is susceptible to separation anxiety, you will both be better off relying on a crate.

If you and your dog are new to Crate Training, or you put your puppy’s crate away as your dog matured, (re)introduce it slowly. Leave it out where he can see it, with the door open. Feed him in the crate. Toss toys into the crate an make it a game. Never, ever use the crate as punishment, nor as a substitute for a trip outside to eliminate.

Dogs should never be left alone for more than six to eight hours at a time. If you have a schedule that necessitates your dog to be left alone for 10 or 12 hours a day – opt for a dog walker, or settle for a cat.

During the first phase of crate training, leave your dog in the crate for a few minutes at a time. Put a special treat or toy into the crate. Make sure your dog only gets it in the crate. The Kong toy you fill with treats or peanut butter or soft cheese is excellent for this.

With a happy, friendly voice tell your dog it’s time to “rest” or “kennel” (or some other word you choose. What word you use doesn’t really matter as long as you are consistent). Put the treat or toy in the crate, and let him go in after it.

If your dog doesn’t cooperate – go get him. Don’t tell him to “come” to you for something it doesn’t enjoy – he will associate bad things with coming to you. Place your dog in the crate, close the door and latch and walk away. Do this for just a few minutes the first time.

If your dog whines or cries at first, ignore him. When he’s quiet, let him out and tell him he’s such a smart, wonderful dog.

Increase the time you leave your dog in the crate gradually – a minute or two at a time. Most experts will tell you a good milestone to reach is 15 minutes. If he accepts being in the crate that time frame he should be fine. You and your pooch will both be happy – he has no decisions to concern himself with, and your home will be “mess free”. A win-win for both of you.

This article was sponsored by The Dummies’ Guide to Tinkle Belts. 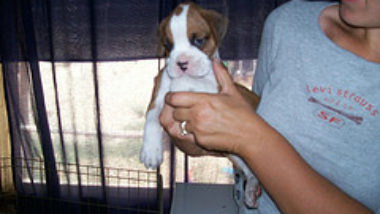 Q&A: We bought a “bull Mastiff puppy” but we are starting to think that he is a boxer. Is there any way to tell the?