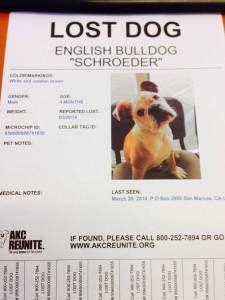 San Marcos, CA – A San Marcos family lost its beloved English bulldog puppy after they say a doggie daycare handed it over to an unknown man.

The playful 5-month puppy, named Schroeder, was a $ 4,000 birthday gift to Michelle Hinojas of San Marcos.

“He was one of a kind, we called him a wrecking ball,” said Hinojas.  ” He would just run through everything, he didn’t care what was in his way, he was always happy.”

But Wednesday night Schroeder somehow slipped under the fence of a storage facility where his owners are resident managers.

Jason Willet, who is from out of town, said he saw the dog run onto San Marcos Boulevard, which is a busy street.

Willet said he caught the dog and brought him next door to a doggie daycare called Dogtopia, thinking maybe the dog had escaped from there.

Drew Boomer, regional Vice President of Dogtopia, said an employee there offered to help, by taking the puppy.  She said the employee planned to bring puppy to the Humane Society after she finished closing.

But 45 minutes later, a man captured by Dogtopia’s surveillance camera, showed up.

Boomer said he identified the puppy in detail and claimed it was his, so the employee turned Schroeder over to him.

“It just breaks my heart that he got out and was found, only to be gone again,” said Hinojos.

Hinojos has created a Facebook page called bring Schroeder home, in hopes that it will provide tips as to the lost puppy’s whereabouts.

A spokesperson for the San Diego Sheriff’s Department said they are treating this case like any other case, and hope to find the stolen puppy.

Up to $ 1,000 is being offered to anyone who provides information that would lead San Diego Sheriff’s to the missing Bulldog. 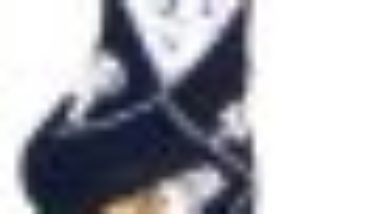 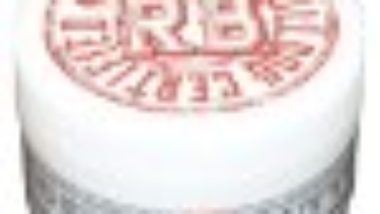