Three-year-old Terrier mix, Sam has a problem with biting. Other than biting the other dog at home, an 8 year old Spaniel, Sam has the habit of a dog biting and surprisingly snapping at his owners, Ted and Shelly. Both of them is concerned that Sam’s biting behavior will cause problems and because of this they constantly make sure that Sam won’t get near their grandkids for fear of their safety. However, keeping Sam in a separate area of their home has only caused an increase in their problems; he has started to chew and bark out of frustration, he gets easily agitated and always get a little out of hand. Lastly, Ted and Shelly both decided that it is time to put a halt on Sam out of his biting habit.

Since the dog has clearly outgrown the puppy stage that has the most amounts of biting and gumming and the biting habit has been going on for a while , and Shelly sought the help of a professional. Obtaining a referral from their family vet to an excellent veterinarian behaviorist, Ted and Shelly made an appointment to bring Sam and meet with the professional vet behaviorist. During the first meeting, Sam made an attempt to bite Shelly when she pulled him out of his kennel and snapped at the behaviorist when he tried to hold him.

Since a medical problem might be the cause of the biting puppy situation, the behaviorist felt the first step was to have Sam do a medical examination. They considered that a medical reason may be the case because since Sam snapped at Shelly and the professional when he attempted to touch the small dog. Often, dogs that are in pain or discomfort use biting as a form of protection to stop the pain from occurring. But after a full medical examination on Sam, he’s found to have a full bill.

The next thought was that Sam might be responding to a specific trigger. But since Shelly and Ted adopted Sam when he was still a puppy, they can’t figure any possible abusive background on their pet. To see how Sam interacts with them and their older dog, the behaviorist regularly makes a visit to Shelly and Ted’s home. The visits proved to be quite educational and the behaviorist was able to determine that Sam used biting to showcase his jealousy. Especially since he was kept in a different part of the home and avoided when the grandchildren come to visit, Sam is increasingly jealous and uses biting to show his displeasure .

After the regular visits and examinations on the smaller pet dog, a training plan is implemented where Sam is instructed “no bite” and then sprayed with a water bottle. This command enforces the training and the spritz gets the dog’s attention. Once Sam closes his mouth, he is remarkably praised. Additionally, more steps were made to include Sam back into the home. Whenever the grandchildren come to visit, Sam is present, but he’ll be securely muzzled until he became fully trained to stop biting. Once this training was complete, Sam could be commanded and immediately close his mouth in order to abort the biting attempt. However, Sam wore a muzzle whenever Shelly and Ted left the two dogs alone and unchecked , to prevent any injuries to the older dog. 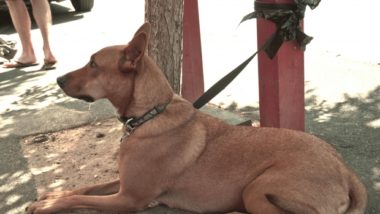