Almost every breed person will tell you that their breed is not the breed for everybody,” says Kate Zimmer, area rescue coordinator for the Rhodesian Ridgeback Rescue. “If you have a general-rescue group, and not a breed-rescue group, they might not be familiar with that type of breed, and you’ll end up with not as careful a placement.” Zimmer gives an example of an uninformed person adopting a beagle. “They might get mad at the dog and debark them because they bark. But that’s what a beagle is bred to do, chase down a fox and bark, ‘It’s over here!'” On Sunday, February 18, more than 13 local rescue groups will participate in an animal adoption event called “Cupids and Canines.” Darlene White, dubbed the “Puppy Pimp” by her peers, has made appearances on TV for nearly seven years as a representative of the San Diego Animal Support Foundation. “We try to help out the least-funded groups,” says White. “We rarely take on easy ones. Young puppies don’t need exposure — everybody always wants a puppy.”

White finds her work as frustrating as it is rewarding. “It’s almost like having a cure for cancer that no one will take. Every day there are more and more homeless pets. The saddest thing is that if everyone would spay and neuter their dogs tomorrow it would be all over with. We would have solved the entire pet-overpopulation crisis.”

Despite the overwhelming amount of unclaimed dogs, rescue coordinators take as much time as they need in placing an animal in a new home. “I have refused placement for different reasons,” says Zimmer. “It’s difficult, because if you refuse someone for something, what happens is they just learn what to say to the next person. It’s best to educate them and talk to them about whether or not [a certain breed] is the right dog for them.”

Zimmer recently steered one family away from adopting a ridgeback. “They wanted to get a ridgeback for their daughter, who is very active and athletic and really wanted a dog. My gut instinct is, don’t get a dog for a teenaged girl, because then they get into boys.” Zimmer was concerned about what might happen four years from now when the young woman left for college. “Then the dog is five, and you have at least seven more years with the dog.” She was also wary of placing a large, active dog into a home with three children under five years of age. “It’s doable, but it’s a lot of work. Ridgebacks are very active dogs, and it can be a lot to manage three little kids and their schedule and the dog’s.”

Rather than refusing the family’s request to adopt a ridgeback, Zimmer insisted they “go

Filhotes da Lira X Dante. Video Rating: 4 / 5 Click Here to Learn How Easy it is to Groom Your Dog at Home! Beagle 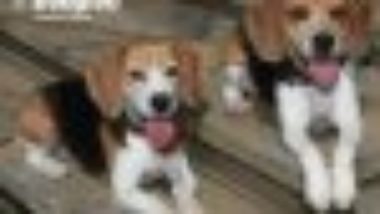