Andy Cohen grew up in Clayton in a pet-free home.

But in October, the Bravo host became a dad to Wacha, a 40-pound mixed-breed rescue dog, and his life changed very much for the better. That’s why the timing was perfect for Cohen to come home to St. Louis and act as grand marshal for Sunday’s Beggin’ Pet Parade, part of the annual Soulard Mardi Gras festivities.

“I’m excited they invited me,” Cohen says. “I’m so into dogs right now, and the proceeds go to a shelter.” (The $ 10 registration fee benefits Open Door Animal Sanctuary.)

Ask Cohen about Wacha, named for Cardinals pitching phenom Michael Wacha, and he’s happy to share the dramatic story of how the two became a pair.

“I’d been thinking a while that it was time to get a dog,” he said last week from his office in New York, where he is developing shows for Bravo under a new production deal while also continuing to host “Watch What Happens: Live” at 10 p.m. Central Sunday-Thursday. “I wanted something to take care of.”

Cohen says he waffled because “I knew it would change my life, and I kept asking myself, are you sure?”

But after years of an unpredictable schedule, including a decade when he traveled almost constantly for CBS News, Cohen says his life now is more regular. His live talk show keeps him in New York at least five nights a week.

He dipped his toe into dog ownership, knowing he wanted a rescue. “There are so many great dogs out there looking for homes,” he says.

Beth Stern, the animal activist and wife of Howard Stern, hooked him up with the North Shore Animal League, “and I was working with them, but I was also looking online, just dog browsing.”

One night, very late, he was struck by a picture.

“I saw this dog on Petfinder.com, and he was looking at me,” Cohen says. “I’m a big fan of Snoopy, and I’d kind of wanted a beagle, and this dog was a beagle mix. He just struck me. I couldn’t stop looking at him.”

Like someone venturing into online dating, he was anxious.

“I immediately sent an email. Then I emailed again. The next morning, I told my assistant, ‘Find me this dog.’” 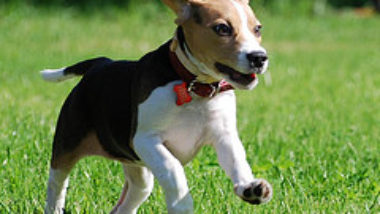