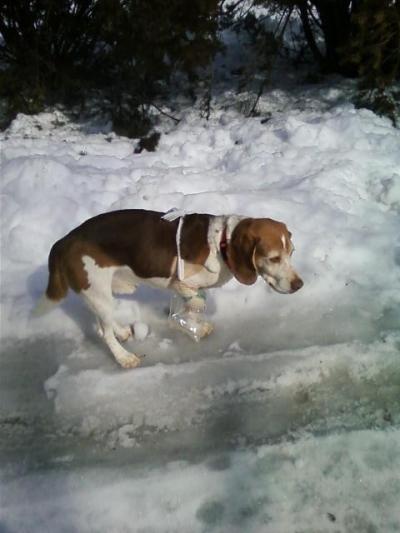 Jackson, a 7-year-old beagle, had his front left leg removed after he was caught in a muskrat trap for at least 36 hours, SPCA officer Abigail Avery said. (Submitted)

The Adams County SPCA is looking for information regarding a muskrat trap found along Marsh Creek Road and Route 15 in Freedom Township after a dog was found caught in it.

On Feb. 2, Jackson, a 7-year-old beagle, was found in the trap, and officials estimate he was ensnared for at least 36 hours.

“The property owner doesn’t know where the trap came from, but it had clearly not been checked for an extended amount of time,” SPCA officer Abigail Avery said. “The trap itself isn’t illegal, but it wasn’t marked and hadn’t been checked within the legal amount of time.”

According to Pennsylvania law, trappers are required to check their traps every 36 hours, though most check more regularly, Avery said.

“The owner of the trap is facing charges of animal cruelty and possibly other charges through the gaming commission,” Avery said.

The beagle was discovered by his owner, Kathy Keys, who had been searching for him since he went missing 14 days earlier. He had escaped from the house when a gust of wind blew the door open, she said.

Though people kept telling her that Jackson was most likely dead, she refused to stop looking. After two weeks of searching, she finally found him along the creek.

“I prayed and cried out ‘Come home, Jackson,’ and all of a sudden I started hearing him yelp,” Keys said. “I found him caught in a trap … His leg was a mess and he was covered in mud.”

She stayed with him until help arrived, holding the trap under her arm to keep the chain from dragging Jackson into the creek.

“The trap’s chain ran into the water,” Keys said. “He had dug a hole to anchor himself to the bank to keep

Human and dog brains both have dedicated ‘voice areas’