Stories From The E.R.

“Are you sure Dozer did not swallow any dog toys or clothing?” I asked.

“No, we keep the yard cleaned up so there is nothing for the dogs to get into,” replied Dozer’s owners.

Thus began the search for the cause of vomiting in this 8 year- old Alaskan Malamute.

There are at least 63 causes of vomiting in dogs, which is probably why we see so many cases at our emergency hospital. Sometimes we need to do diagnostic tests such as X-Rays and blood tests to start narrowing down the list if the cause is not apparent after a thorough physical exam and history-taking. A few dogs need an even more sophisticated level of diagnostic workup, such as an adrenal gland function test or abdominal ultrasound.

At 8 years old, it seemed unlikely that “dietary indiscretion” would be a likely cause of Dozer’s gastrointestinal problems. Much higher on the list were conditions such as cancer, immune-system disease, pancreatitis, liver failure or kidney failure.

Dozer seemed uncomfortable and somewhat tense when I palpated his abdomen, but did not appear overtly painful. “Let’s do some radiographs to see what things look like,” I suggested. (My X-Ray vision was not up to par that day.)

When the digital images appeared on the screen, the nurses could tell something was abnormal. We all gathered around to throw our two cents in. Dozer’s intestines were very distended with gas in certain areas. There was a strange density in the cranial (toward the head) part of his abdomen. We kept looking.

In one of my finest moments of X-Ray reading history, I suddenly saw it: “It’s a rubber ducky!” I almost hollered. Squinting at the images and moving closer, we asked each other, “How (and why) does a dog swallow a rubber ducky whole?”

Two hours of surgery later, the naughty duck sat like a proud trophy outside Dozer’s run. It was somewhat blackened after the journey through his intestines, but probably was still quite capable of floating if required.

The owners explained, “It used to be Dozer’s favorite toy. He probably buried it months or years ago. He may have been mad at us for leaving him behind for a few days when we went out of town last week, and decided to dig it up and swallow it to get back at us.”

Would a dog do that? 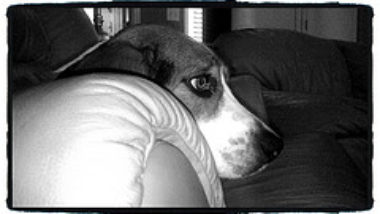 My Beagle has a serious barking problem! (big surprise, right?)? 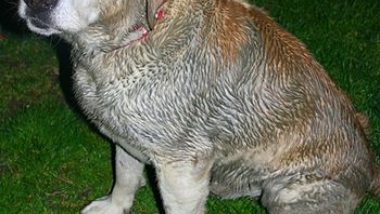 Getting the Stink out of Your Dog