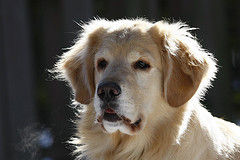 The Golden Retriever is an AKC registered dog breed. The following article reviews the breed.

The golden retriever as a breed was first developed not in England, but Scotland around mid 1800s. You may perhaps be wondering why it was not named after its country of origin, so do I. Lord Tweedmouth is credited for developing this breed primarily for hunting, reportedly from a cross of the water spaniel and the bloodhound.

It was used for retrieving the birds that were shot during the then increasingly popular duck hunting spot in both the fur and feather and water retrievals. This was because of their characteristics like being good swimmers, their waterproof coats, and very high intelligence levels.

Though it was developed to fill a need, it is one of the most popular pets in the world over two centuries later. It is now available across the globe as a pure breed or as a cross.

The English golden retriever is slightly heavier and shorter, has a blockier forehead, a slightly wider muzzle than the American type. It has a deeper chest, a shorter tail, and a less hairy and firmer coat which is predominantly light cream or any of the lighter shades of gold color.

Perhaps its most endearing qualities include its warm temperament and versatile nature that have made it quite popular as a family pet and even assistance for the handicapped. Its relatively high intelligence has made it a top choice for a rescue dog, drug sniffing dog, tracking and hunting companion and of course an excellent show dog.

It has a knack for banging the obedience and conformance awards in several competitions. One of the kennel associations beautifully and accurately describes the English golden retriever in the ‘general appearance’ category in this manner;

“A symmetrical, powerful, active dog, sound and well put together, not clumsy or long in the leg, displaying a kindly expression and displaying a personality that is eager, alert and self-confident…”

Kevin Taylor is a Golden Retriever Trainer and breeding enthusiast, and enjoys helping others get started in this amazing hobby by sharing information about the English golden retriever

Golden Retriever Amazon products you should keep an eye on:

The Kingdom of Dog: A Golden Retriever Mystery
When his mentor, Joe Dagorian, director of admissions at prestigious Eastern College, is murdered during a fund-raising event, Ste…

Golden Retriever 2 1/2 x 3 1/2 Photo Frame
Want to brighten up your day? Put this adorable frame in your home or office. Depicts your favorite dog holding onto to your pictu…

I Love My Golden Retriever Vinyl Window Decal Dog Sticker
This is a high quality die-cut vinyl decal with no background. It is perfect for applying to windows, trailer, mailboxes, laptops,… 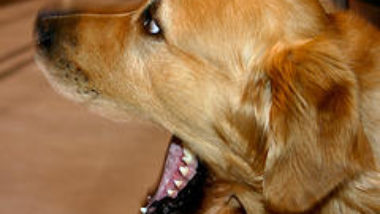