Since most dogs avoid soiling where they sleep, a crate encourages control. Before four months of age, a puppy doesn’t have much bladder capacity or sphincter control. He’ll need to relieve himself frequently. Many people mistakenly think that when a puppy can make it through the night without going to the bathroom, he can hold it for eight hours during the day. The truth is that bodily functions slow down at night, enabling dogs (and people) to sleep through the night. Not true during the day.

. Go outside with your puppy and praise him every time he eliminates outside. Continue quietly praising (verbal praise) the entire time he’s squatting. 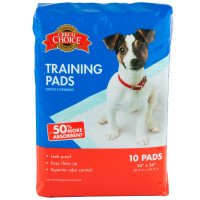 Our Training Pads have a built-in odor control specifically designed to neutralize tough urine odors. Made with advanced technology that converts liquid into gel and locks in moisture. A puppy attractant accelerates housetraining time by encouraging instinctive marking behavior for the quickest results. This carefully blended attractant uses a mixture of synthetic marking pheromones and attractant scents that encourage puppies to eliminate on the pad. Training Pads are a convenient and easy way to train your puppy. They help simplify the house training process. They feature plastic backing and sealed edges to protect your floors. Training Pads are ideal for indoor dogs, puppies or sick dogs that can’t be walked during the day. Also great if you have to leave your dog alone for long periods of time. Usage Tips: Housebreaking your new puppy can seem like a chore. Training pads make a tough job easier with a carefully blended attractant to encourage your puppy to eliminate on the pad and not your carpets. For the first few weeks, when you cannot watch your puppy, confine him to an area with easy to clean floors such as tile, lament or wood. Place the pad on the floor as far away from his food/water and sleeping area as possible. He will quickly learn to pee on the pad, thanks to the special attractant. If your puppy is still having accidents, watch him closely and place him on the pad as soon as he starts to potty. Timing is crucial. If you miss, you must wait for your next opportunity because you cannot teach him to go on the pad after the fact. With a little time and a lot of patience, your puppy will be using the pads in no time! * Up to 50% more absorbent than the leading economy brand. Made in China.