This breed of dog, also fondly called as APBT, is known for its loyalty and intelligence. The dogs with this breed make excellent companions since they are very aggressive because of their protective nature.

The following are some of the basic facts breeders would really love to know about APTBs:

Classed as a Terrier, they do well as either outdoor or indoor dogs. Their coat is smooth, shiny, thick, and short with varying color. They stand between 18 and 22 inches and weigh between 30 and 60 pounds. Pit Bull‘s are considered courageous, full of energy, and loyal. They should be socialized early on with other animals especially with children. On the downside, they often suffer from heart murmurs and mange.

This breed’s ancestors came to the United States in the mid-1800s with some Irish-Boston immigrants. Like the Staffordshire Terrier, they were originally bred from bulldogs and terriers. Since APBT is a forerunner to the Staffie, it was also molded to be a fighting dog. However, the Americans made their variety some pounds heavier and trained them to have a more powerful head.

Bull baiting and dog baiting were prohibited in England so bull terriers were no longer bred for bouts. It is in America where the pit bull also gained its popularity for many uses and reasons like:

Here is some history about the cause of dilemma regarding the registries of APBTs. 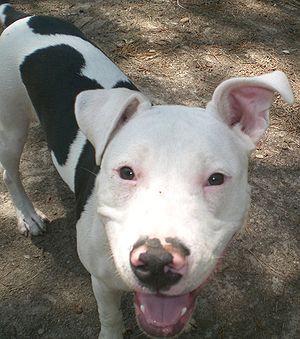 In 1898, the United Kennel Club was structured to provide fighting guidelines and registration for APBT as fighting dogs. Later, there were breeders who shun away from dog fighting so they asked the AKC to recognize their pits so they would be fit for performance events like dog shows. In 1935, the AKC approved of their petitions but the dogs were registered as Staffordshire Terriers, naming them after the little province in England that the breed was known to have originated from. Thus, many breeders have dogs that have dual-registry.

It is interesting to note that Petie, which was one of the stars in the, “Our Gang” TV series was the first breed that was dual-registered to be Staffordshire Terrier/Pit Bull. However, the UKC later started registering other performing-type varieties and they also began holding dog shows comparable to those of the American Kennel Club.

The AKC soon sealed its studbooks to APBTs. They allocated registration to those pit breeds with lineages that are listed as Staffies. For a little time during the 1970s, the AKC disclosed the American pits to their studbooks.

In 1973, the American KC decided to add the word “American” with the pit’s name to discriminate it from a Staffie. At present, those dogs with mixed APTB-StaffIe parents are recognized by UKC and even the American Dog Breeders” Association as “American pits or American pit bull terriers”.

Nowadays, the pit has employed as search and rescuers, police/armed service dogs, livestock workers, and even as therapy animals because they are good as companions and working dogs.

Moreover, the variety can even compete in dog sports such as herding, obedience, and conformation, French Ring, and Schutzhund. Breeds of this type can be very loving as pets for everyone. The physical demands and harshness of various activities developed a healthy, strong, and stable animal.

If you want to have an APBT as a pet, be sure that the puppy is handled well and properly socialized. A solid and good training will surely produce an obedient, tranquil, and good companion or even a working dog! 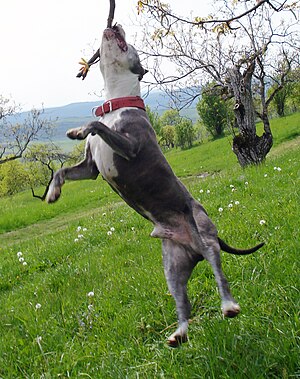 I purchased a book about 5 months ago, and I was hoping for some advice. First, let me say that I like the book. It explains the foundation of all training–timing, motivation, consistency–allowing the dog owner to better understand the training process. Also, it does a very good job of explaining that dogs are pack animals–and will test the alpha’s leadership at various times (in my case, all the time)–and how that factors into training.

My question is not about dog training, however, but about breeds of dogs. Specifically, APBTs [American Pit Bull Terriers] and gAmStaffs [American Staffordshire Terriers]. The AKC does not recognize the APBT as a breed, however, many dog fanciers recognize the two as separate breeds even though they share a common origin and look very similar. Or, if not separate breeds, two “strains” of the same breed, the AmStaff being bred for “show” and the APBT being bred for “performance” – meaning the gameness of the original dogs has largely been bred out of AmStaffs, but still remains in APBTs. I’d like to hear your take on this subject since you own and have owned APBTs or mixes thereof.

The reason I ask is that I’m considering getting an AmStaff or a Staff Bull Terrier. My wife and I currently own a Dalmatian, however, so I’m a bit concerned about the two getting along, especially when I’m not around. Should I stay away from these breeds? I’ve had one breeder tell me they should be fine if the Staff is introduced as a puppy, while another told me never to leave them together alone. What would be your recommendation (I realize all dogs are individuals and may possess different traits than others of the same breed)?

I love the bull breeds, personally. And while everything you’ve stated is pretty much “right on the money,” … I would suggest that if you decide to adopt one of these breeds you make sure that:

It’s true… many of the dogs in this breed seem to have a genetic basis for dog aggression. I don’t think that they come out of the womb being dog aggressive, but rather that they have temperament characteristics that tend to make them more dog aggressive. (i.e., dominance and a strong defensive nature).

As for the difference between the APBT and the AmStaff, the difference is largely one of registration. (AKC vs. UKC). And yes, the AKC version has been bred with more of an emphasis on conformation (like all AKC breeds).

If I were to adopt another bull breed, it would likely be the Staffordshire Bull Terrier (the smallest of the “pit bull” breeds). I like the idea of having a big dog in a small package. But to be honest, I’m really tired of the media stigma that this breed has received. And in real life terms, this means having a dog that you can never really take off leash at a park – not because the dog is dangerous or untrained – but rather because people are so darn afraid of what the media has led them to believe about this breed, that they snatch up their children and run screaming from the park.

On the upside, this stigma can work in your favor, too. Most criminals know that a “pit bull” is the type of dog that you don’t want living in the house that you’re about to rob.

On a personal note, there was a character who let his Rottweiler run off leash at the park I used to train at. This dog had a bad attitude and was a very dominant-aggressive dog. The owner was under the impression that his dog was trained. He’d give multiple commands, such as, ‘Ranger come, come, come, come,’… but all Ranger would do is engage my clients’ dogs and try to initiate a dog fight.

Well, after I adopted Forbes (an APBT-mix that looks like one big muscle and is about as wide as a Mack truck) and started keeping him in a down-stay while I worked with my clients’ dogs… Ranger’s owner suddenly started keeping their dog on a much shorter leash. If he didn’t attach his dog to a leash as soon as he saw me enter the park, then he’d definitely run to grab his dog THE VERY INSTANT that he saw that Ranger wasn’t going to immediately turn and come when called.

I guess that’s what you call motivation, eh?

Yes… it’s probably a macho thing. But IF there is a stigma, then you might as well use it to your advantage to encourage reckless dog owners with untrained dogs to keep their mutts on-leash. 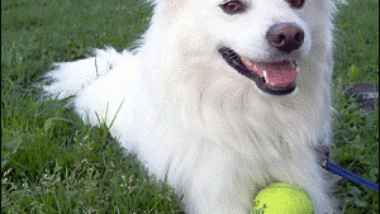 Many frankly steamed over closing of Zog's Dogs