Of all the dogs, the Dalmatian is easily spotted by its characteristic black spotted features. How these black spots evolved remains a puzzle. The Dalmatian is a European breed, first discovered in Western Yugoslavia. In the USA the Dalmatian was first introduced about 120 years ago and still remains one of the most popular dogs as a pet.

One of the great features of the Dalmatian is its energy level and ability to exercise for long duration. The Dalmatian is not a pet for a small apartment because it needs a lot of room. Training this dog is not difficult but does require a great deal of patience. Training can be difficult at times because the dog often tends to become stubborn. While the Dalmatian does make a great pet dog, it often does get ill tempered with other dogs. Ironically, it is quite friendly with other animals like cats and even horses. For those families with children, the Dalmatian should not be the first pet as it is full of energy and though not intentional, it can be a little rough with small children. However, if the dog is well trained it can make a great loving pet. Despite its size and energy, the dog will rarely harm a child or the owner.

The Dalmatian is one dog that needs regular exercise and thus, it is more suited for people who are active. Simply taking the Dalmatian out to poop will not be adequate as it prefers to go for long outdoor runs. The majority of Dalmatian owners indicate that it makes a great jogging companion. When you first buy the Dalmatian as a puppy it will gladly live in the apartment, but as soon as it grows, it will let you know where it wants to go. Throwing a ball in the park is another way to provide exercise for them as well.

The Dalmatian prefers the cool temperate weather more so than the hot humid climate. When outside, one has to make sure that it is provided with lots of water and a shade to rest under. The dog does tend to become attached to humans and loves people company. Even though the Dalmatian loves the outdoors, it also prefers to be with humans once inside the home.

While the Dalmatian generally is disease free, it does suffer from deafness with age. Other common medical ailments that may afflict the dog include an under active thyroid gland, allergies, visual problems and seizures. While CHD has been reported, it is very rare and no where near as common as what occurs in rotteweillers. All Dalmatian owners are recommended that the dog be checked regularly by a veterinarian to screen for the above mentioned health problems

The majority of pet dalmatians live at least 12- 15 years. There are even reports of some Dalmatians living a lot longer. While comparisons are difficult, the dog can be as loving and gentle as a Labrador when it is well trained. 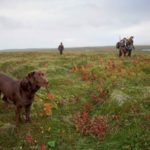 Officially named after Dalmatia, a region in Western Yugoslavia on the Adriatic sea and at one time part of Austria, the Dalmation is a actually a pretty ancient dog breed. These dogs were known in other parts of the world long before they acquired their breed name of Dalmation. Researchers have found specific references to [&hellip;]