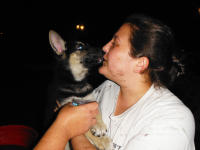 Lisa Millirons gets a thank you kiss from a puppy she helped revive at the Lowell Folk Festival Saturday night. (SUN/ROBERT MILLS)

LOWELL — A police officer was flagged down and told that a man was dragging a puppy behind him on a leash Saturday night. When that officer found the puppy at Market and Palmer streets, the puppy was unconscious, laying on its side, with its eyes rolled back into its head.

The dog’s owner, a 46-year-old Lowell man, appeared to be intoxicated, and told police the puppy was sleeping, according to a police report. Police said the dog, a shaggy Shephard mix with paws too big for his body, was barely breathing.

Police and a pair of Trinity Ambulance EMT’s, Jeff MacDonald and David Rousseaux, who were on bike patrol at the Lowell Folk Festival sprung into action to try to revive the puppy, giving him water and trying to get him to 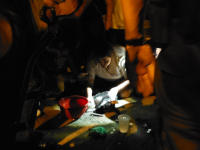 Before long, Lisa Millirons, of Lowell, joined the effort, pressing her ear to