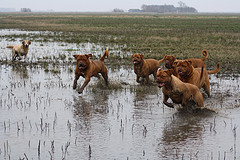 The Dogue de Bordeaux is an AKC registered dog breed. The following article reviews the breed.

For those who love big dogs, you will find the Dogue de Bordeaux adorable. It is also known as the French Mastiff, or the Bordeaux Bulldog. This dog breed is known for their being ‘huge’ compared to other dog breeds. They have large nose and have a wide set pair of eyes. They are mistaken for a bulldog with their large cheeks, very loose facial skin on their face and nose as well as have an overall ‘wrinkled’ look. Dogue de Bordeaux can grow to a height of approximately 30 inches. Most dogs from this breed can come in golden, fawn, or reddish type of browns.

This kind of dog is believed to have existed long before its other dog counterparts like the Bull Terrier or the French Mastiff which came to existence only around late 1920s. It was only until the year 2008 that the Dogue de Bordeaux was given global recognition. The affluent in France are believed to have own at least one of this dog because of their exemplary loyalty to their masters. Since the Renaissance and up to date, many dog-lovers are seen to have own this dog.

Dog owners prefer this dog breed over the others because of its good temperament. They are found to be well-mannered, loyal, and not too aggressive when it comes to their masters. Strangers be warned though because these dogs can get all too-aggressive when it comes to people they do not know or often see around. And for this characteristic, these dogs are considered as best watch dogs. By nature, these dogs are very playful, warm, and calm despite their overall fierce and stocky look.

Generally, dogs from this group are healthy and would often last long. So you don’t have to worry about having dogs that do not stay healthy or are typically short-lived. They are very low-maintenance dogs as well. They do not require periodical grooming unlike other dogs that requires a regular visit to the dog salon. A once a week brushing of their locks would suffice for these dogs.

Lastly, dogs like these can live in practically any size of living quarters provided its well-ventilated as they are very calm and docile dogs when indoor. Simply walk them at the nearest park whenever you have time for their muscle exercise. Dogue de Bordeaux is one of the best domesticated pets to have, go get yourself one today!

Bianca is a copywriter who writes about online business strategies, niche marketing, and even pets. Read more about her work at: Dogue De Bordeaux at http://doguedebordeaux.org.uk.

Dogue de Bordeaux eBay auctions you should keep an eye on: