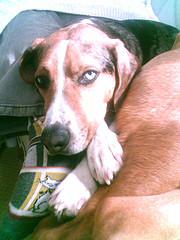 The Catahoula Leopard Dog is a dog breed being considered by the AKC for inclusion as a registered breed. The following article describes the breed.

The Louisiana Catahoula Leopard Dog, also known as a Catahoula Leopard Dog, Catahoula Cur, and/or Catahoula Hog Dog, is one of, if not the oldest breed found in the United States. First recorded in 1686, near the Parish of Catahoula, in Louisiana, these amazingly handsome, fearless, tireless, hardworking dogs with spotted leopard like spots and white/pale blue eyes, were immediately considered worth their weight in gold.

The word “Catahoula” is believed to be a corrupted version of the Choctaw Indian word for “beautiful, clear water”…aptly describing their striking white/pale blue “glass” eyes.

Believed to be descendents of Hernando de Sotos’ Spanish war dogs (Greyhounds and Mastiffs), abandoned 100 years earlier, the theory is; they were captured and bred with “dogs” thought to be domesticated red wolves; belonging to the Choctaw Indians in the Catahoula Lake region of Louisiana. Later they were bred with dogs the early settlers brought with them to Louisiana. From that, three lines were derived.

The three lines from which they descend are: McMillan, Fairbanks and Wright; each with specific distinctiveness. Whatever their genealogy, they are remarkable dogs! Indians, hunters and settlers recognized the value of their untiring and courageous nature. Used to flush wild boar from the woods, they instinctively would incite the animal. The squeals of their target would attract other wild pigs in the area. The dogs would then draw not one, but several to chase them to trap the owners prepared. The wild pigs would follow the lead dog into the pen, at which point the dog would smoothly scale it to safety. The remaining dogs would shield the pen entrance as the owner closed the gate, leaving the wild pigs trapped. As dangerous as it was, it was all in a day’s work for a Catahoula!

The Catahoula proved their worth in other valuable ways. Labeled as a “scent” hound, with their extraordinary nose and webbed feet, the Catahoula would easily “wind” and herd lost cattle by “heeling” them out of the alligator filled swamps.

Hunters and trappers appreciated their tenaciousness. They would not only “tree” opossum and raccoons, they would climb the tree to keep him there!

Things to know about a Catahoula Leopard Dog, before acquiring one:

1. Temperament: Loyal to their owners; they are not particularly friendly with strangers. They are stubborn, high energy, assertive, and persistent. Tremendously independent – they are natural pack leaders.
2. Guard dog capacity: Exceptionally protective of their family…human or animal.
3. With other dogs: Not dog friendly…can be aggressive, especially with same sex.
4. Children: Good with children they have “grown up” with and if socialized as a puppy. Due to their innate herding instinct, they should be attentively supervised with small children.
5. Small animals: Not good with small animals. High predator drive. Must be socialized while very young.
6. Activity level: Tireless – needs minimum of 2 hours of running exercise daily – this dog is bred to work…it needs a job!
7. Special skills: Superb hunting dog, can be aggressive with livestock.
8. Health – Generally healthy, with the exception of possible hip dysplasia and vision problems. The more white the dog has, the more likely the odds of hearing and/or vision problems.
9. Size: Medium – Height – 20-26 inches Weight varies according to which of the three lines they descend from.
McMillan – 50 – 60 pounds
Fairbanks – 65-70 pounds
Wright – 90-110 pounds
10. Lifespan: Average 10-14 years.
11. Learning capacity: Exceptionally high.
12. Problem solving ability: High
13. Grooming Care: Minimal – Short to medium coat.

It should be noted, a novice dog owner is no match for this incredible dog. They will run circles around them! To channel their energy is like trying to control lightning in a bottle! This is not a dog that will be happy in an apartment, condo or small fenced yard…remember, they effortlessly can scale a six-foot plus pen!

Bottom Line: A Catahoula Leopard Dogs needs assertive, strong leaders, who will respect their dog’s physical activity needs, challenge them mentally and command their attention. There is almost a sense of wildness with this breed.

They respond best to positive reinforcement, punishment-free training. They love to learn, and meet each new challenge with enthusiasm. They can be aggressive in dog parks. They can be undyingly loyal and affectionate with their owners.

Even though the American Kennel Club does not yet recognize them, the State of Louisiana, has shown their appreciation for this marvelous animal. In 1979, the Louisiana Catahoula Leopard Dog was honored and recognized, as their state dog.