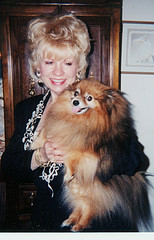 The Pomeranian dog is an AKC registered dog breed. The following article reviews the breed.

Pomerianian dogs are fun to have but you have to learn the special way of caring for them. Here are the rules.

Pomeranians are popular toy dogs which are usually owned by glamorous people like the late Dame Barbara Cartland, the doyenne of royal romantic fiction. At first glance they don’t look like dogs, they look more like cats. They are thickly furred, especially in the neck area which makes their locks bloom or balloon. As such they resemble a miniature version of the mature male lion.

They are, however, nowhere near the male lion in ferocity. On the contrary, Pomeranians are a gentle breed. In many cases, they are more civil than Poodles. And because their bodies are small, Pomerians tend to bark in a tiny, nearly inaudible voice the tinier they are. When a Pomerian dog isn’t moving, you can usually mistake it for a stuffed toy. My first Pomerian looked like one of those cute Ewoks in the George Lucas film.

But the Pomeranian dogs hair can also be its curse. So this is where you have got to be careful. As puppies this won’t be a bother, but watch out once they are full grown. The thicker their locks of hair, the more the chances that some of their dog droppings might get entangled on their backs when they defecate.

This can get pretty nasty especially when they are having a loose bowel movement.

Since this can happen pretty often, sooner or later the Pomeranian anticipates what you are going to do next. When it doesn’t want you to wash its back, the Pomeranian will attempt to hide the trouble on your floor carpeting or somewhere else. When you try to pick your pet up it usually attempts to hide, say, under the bed.

So it’s a good idea to have the Pomeranian’s hair cut around the back. But most people don’t because it robs the Pom’s natural beauty. It’s your choice.

This is where I disagree. Of three of my Poms, only one of them want to stay in my lap. I daresay they are more curious than social. They like to romp around. Sometimes, they love being carried like a baby in one’s arms. I can sense, however, that they don’t really like that too often. When given a choice, I think a Pomeranian would rather be down the floor free to run around than anything.

Pomeranians are vain, too. Like gold fish they always want to be looked at. Somehow, they seem to know that they are beautiful creatures, cut above the rest of the other dog breeds. You can sense that feeling of superiority most in the company of other dogs.

You toilet train a Pomeranian pretty much the same way you would do other pups. You push a newspaper under their feet when they are about to wet or to pooh. And before long, they will look for a newspaper before they listen to the call of nature. But as I said earlier, you always have to watch a Pom’s back!

When you do find those unsightly stuffings, take your pet to the bathroom and wash its back with soap and lukewarm water. I repeat lukewarm water! For if you happen to hose him down with cold water in the middle of the night, he will remember what happened. And chances are, you will never find him again in the next instance of a bad back.

Never underestimate the speed of your Pomeranian. He can pretty much disappear in a few seconds and out the door! And because he is so tiny he can pass through fences. My first Pomeranian got run over by a truck passing by the neighborhood. Since then, I have always kept my Poms in the house and within closed doors. As I said earlier, these creatures really like to frolic around.

Bathing a Pomeranian is always a pleasure-except when they have dog droppings stuck somewhere as previously discussed. You’ll be surprised how tiny they are when wet. The one extra step you always have to do as compared to other dog breeds is use the hair dryer on your Pomeranian after the bath.

You have to pick a good dog brush to go with the process. Blow-dry the Pomeranian same way you would do your hair, except take special attention to adjust the heating to as little as possible. Once your pet is fully dry, sprinkle a little baby powder and brush its coat some more. The more you brush, the better your pet’s hair gets.

Poms don’t need to go on a special diet. Any brand of dog food will do. But please, absolutely no chicken bones or fish!

Bruno is blogging about pomeranian and Mops (pug dogs) at Hundefeber.no.

[wpramazon asin=”B00FLQ45R2″ keyword=”Pomeranian”] Pomeranians For DummiesIt’s easy to see why you fell in love with the idea of adopting a Pomeranian. Distinguished by its vivacity, intelligence, extro… LittleGifts Pomeranian V3 KeychainMake your keys and bags stand out with these fun Laser Etched Animal Key Chains. With so many adorable dog, cat, and small animal … [&hellip;]

Video: MITRE 10: HOW TO BUILD A DOG KENNEL PRESENTED BY SCOTT CAM