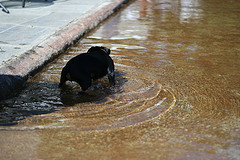 The German Pinscher is an AKC registered dog breed. The following article reviews the breed.

The elegant medium-sized German Pinscher breed is a balanced and athletic dog that originated in Germany. This tall and robust terrier weighs between 23-35 pounds, and stands 16-20 inches tall.

The coat of a German Pinscher is short, dense, smooth, and glossy. Breed standards allow all solid colors including fawn to stag red, all in different shades. Black and blue both with tan/reddish markings are acceptable, preferably clear markings of tan/red.

The German Pinscher requires a great deal of exercise such as daily brisk long walks, jog, or a free play in the yard. They love running alongside their owners in bicycles. This breed is highly competent in agility and obedience. They are generally quiet, but vigilant in their household.

This energetic, protective, brave, and very loyal German Pinscher is an ideal companion dog. Their lively but calm, vocal yet versatile, this breed makes an excellent guard dog. As puppies, they may be hyperactive if not given enough stimulation to occupy their minds and body. This breed barks if they see anything atypical, which may be often.

The German Pinscher is a rare breed that has considerable stamina, with lively disposition yet docile, versatile, and quite vocal guard dog.

The German Pinscher needs weekly grooming and care. Due to their clean and sleep coat, they are generally easy to groom. Just a rub down with a silk cloth for a shiny finish with weekly brushing or as needed.

An intelligent breed, the German Pinscher has an almost keen ability to sense what their masters are going ask them to do.

These dogs are well-suited for agility events as well as obedience training competition, although they require proper socialization and training first. In training the German Pinscher, owners should be able to understand how to work with a dominant breed such as this. Line of authority should be established first before starting training.

As with other breed, they require consistent and firm training methods, and will do great with positive training techniques, giving emphasis on what the German Pinscher is doing right instead of focusing on the wrong. Punishment-based training should never be applied to this breed. Correcting this breed should be done through a firm voice and refusing to give any rewards or attention until they perform as they are commanded.

Socialization with other people, dogs, and other animals is imperative for this breed. For without it, the German Pinscher may be a very aggressive dog, highly territorial and protective of their property even with the people they are acquainted with. Through proper socialization, this breed makes a delightful companion.

If the German Pinscher is to be a watchdog, little training is needed, and some may be needed for them to be effective guard dogs. They can also be trained to hunt and herd. They are exceptional in obedience classes and some other competitive events.

German Pinschers have very developed senses, aptitude for training, fearlessness, endurance, and intelligence. They are brave, attentive, and watchful of strangers, making them great watchdogs.

German Pinscher Amazon products you should keep an eye on: