Megan Parker carries poop in her purse. At least she does when she’s working with her dog Pepin, who’s trained to track the scat of endangered wildlife.

Having the right scent on hand allows Parker to direct her dog during a search.

Parker and Pepin have helped conservation workers protect wildlife all over the world. With Pepin’s superior sense of smell, the 7-year-old Belgian Malinois has tracked everything from endangered kit foxes in the San Joaquin Valley to the perilously small population of Cross River gorillas in the mountains of Cameroon.

“Scat is a gold mine of information,” said Parker, one of four co-founders of Working Dogs for Conservation, a nonprofit group of six biologists who trained 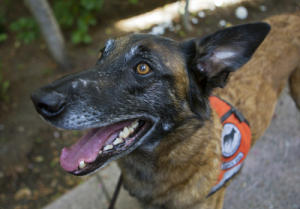 Pepin, a Belgian Malinois with Working Dogs for Conservation, gets ready for a demonstration in Palo Alto, Calif. on April 13, 2013. (LiPo Ching)

their canines to work on behalf of wildlife.

Scientists can extract DNA — the genetic blueprints found in cells — from scat samples to check the sex of animals and learn who’s related to whom. Stool can also be used to evaluate diets, test hormone levels and check for diseases. By mapping areas where samples are found, an animal’s home range can also be determined. All that information helps conservationists keep tabs on endangered animals without having to hunt, trap or tag them.

“People see and hear the world,” said Parker. “But dogs are really good at this because they smell

Dogs this smart deserve a home. Every year, the SPCA need to find homes for thousands of dogs just like Porter — dogs who have been abused, abandoned, or ju…
Video Rating: 4 / 5