Edmonton police received reports of a dog being dragged behind a pickup truck near 114th Avenue and 92nd Street just after noon on Tuesday.

When they were unable to locate the dog in that area, they visited an Edmonton emergency vet clinic where they learned that two males had recently dropped off a female pit bull bearing injuries consistent with road rash.

Clinic staff reported the dog had been dropped off by two males.

Witnesses on scene were able to give police the truck’s licence plate number. The registered owner of the truck is now being interviewed by the police.

Becki Pound is one of the people who saw the whole thing.

“I saw a dog — a pit bull — jump out of the back of the truck while it was moving south. He tried to stop, and he ran over his dog,” she said, adding that the driver tried to swerve away but was unable.

“He got out immediately, picked up the dog into his truck and took him to the animal hospital,” said Pound.

Although it was a horrible thing to see, Pound says it wasn’t the owner’s fault.

“That was the dog, that wasn’t the owner.”

Shawna Randolph, a spokesperson for the Edmonton Humane Society, disagrees.

“It’s up to the owner to know what’s happening with their animal at all times,” said Randolph on Wednesday.

“There are some people who think it’s the right thing to chain their pet… tied in the back of a pickup. And it isn’t,” said Randolph. “It’s so easy for an animal to fall out and 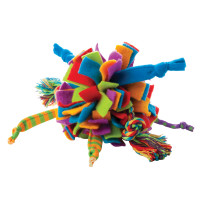 Fleece strains Rope through center Great for tug-of-war Warning: Ingestion of this product can result in serious injury. Advice For Use: Observe your pet’s behavior with the product for suitability. Some items may be inappropriate for your pet. Remove and replace if product becomes damaged. Made in China