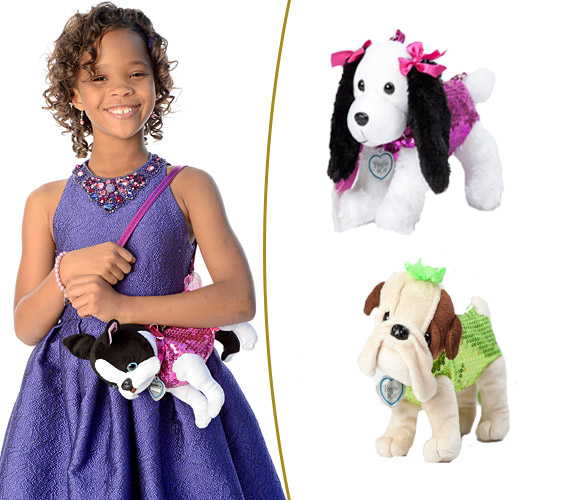 If you grew up in the 90’s like some of us here at MTV Style did, you probably looked at Quvenzhané Wallis‘ puppy purse and were like been there, done that. Back in the late 90’s animal backpacks blew up, and *digging out my barely hidden valley girl accent* oh-my-god-everybody-had-one. Personally, I rocked a plush backpack in the shape of a cow. It ruled, and fit all of my gel pens perfectly. Ravers also really liked animal backpacks, usually in neon, and that carried all the way into the early 2000’s. Important history, y’all. Looks like the animal bag trend is well on its way once again, as Poochie & Co., the company behind Little Q’s adorable canine carry-alls, is reporting (via TMZ) epic sales spikes since their custom “Sammy” yorkie purse appeared on the Best Actress nominee’s arm at the Oscars this weekend. You can get Q.’s exact purses at tons of retailers like KMart, Marshalls, and Ross, among many others, and you can take a peek at some of their selections, including quite a few of the same purses Q herself has worn, here. Those of us who are a little *ahem* old to be carrying around a stuffed animal, though, aren’t left out of the trend, either. We show you some high fashion options to get your puppy purse fix after the jump! 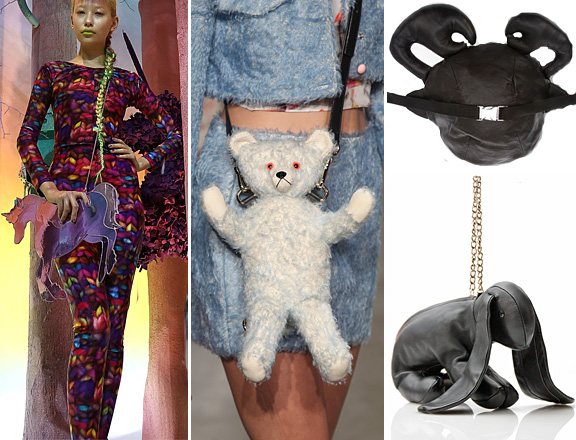 Yes, so, maybe you’re not going to be heading out for a night on the town with a sparkly scottie dog under your arm (although if you do, we totally support it, because you’re probably either little and amazing or a club kid which, yessssssss), but that doesn’t mean you can’t still share your appreciation for the animal kingdom through your accessories. Just this past London Fashion week, not one but TWO designers took inspiration from nature for their bags…sort of. Rave-inspired designer Sophia Webster, known for her unusual handbags, showed a cross body bag in the shape of a unicorn. The pink holographic purse, while still super whimsical, has that high brow edge that makes it a little more, shall we say, adult (but still not really, you could still totally wear it to a rave and look AWESOME). Meanwhile, Fashion East took a kind of dark, The Velveteen Rabbit approach to the animal accessory, by crafting a cross body out of a somewhat surprised looking teddy. We can totally see this guy having his “fur loved off” if you’re familiar with the aforementioned children’s story, by some sprightly British youth, but as a bag it’s a little creepy, don’t you think? Imaging pairing this purse with a murdered out, leather jacket and jeans kind of ensemble? Kind of amazing right? If you’re looking to get your fix now, you can grab Larissa Hadijo‘s Daja fanny pack ($ 195), a leather, hands free carry-all in soft leather, stitched into the shape of a crab. Or, if cute and cuddly is more your steeze, the always chic Bunny Bag ($ 475) from Mandy Coon is a perennial, if pricey, favorite.

Would you wear a puppy purse?

Q&A: What would be a nice professional name for a dog kennel/reptile breeding business?

Puppy rescued from inside tyre