Despite the very obvious differences between a Chihuahua and a great dane, they are, technically, the same animal: Canis lupus familiaris. But are dogs able to look past superficial differences like size, coat color and type, and head-shape and spot the other canine face in the crowd?

A group of researchers led by scientists from the National Veterinary School in Lyon, France, set out to answer this question of whether dogs can recognize other dogs by sight alone. They published their results in the journal Animal Cognition last week. 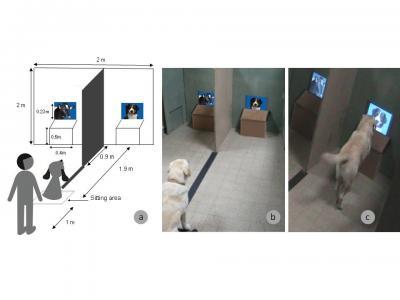 (Photo: Dominique Autier-Dérian / Animal Cognition) A dog has to choose between two screens, one showing a dog face, the other showing the face of a non-dog animal.

After the images appeared on the screens, the dog would be prompted with the word “image,” at which time it would go place its paw on a table in front of one of the screens. When dogs picked pictures of other dogs, they were given treats, thus reinforcing early on in the experiment that they should look for faces of other dogs.

Each dog was shown more than 144 pairs of pictures, drawn from a pool of 3,000 different pictures of dogs and 3,000 pictures of nondog species. The pictures also varied within the groups; many different breeds and crossbreeds of dogs were used, and faces in both groups were pictured in a range of positions – front view, profile or three-quarter view.

All nine dogs were able to group images of dogs together, despite the wide range of breeds presented.

“The fact that dogs are able to recognize their own species visually and that they have great olfactory discriminative capacities insures that social behavior and mating between different breeds is still potentially possible,” the authors wrote. “Although humans have stretched the Canis familiaris species to its morphological limits, its biological entity has been preserved.”

One caveat to this study, as Scientific American noted, is that the researchers did not include pictures of foxes or wolves in the pool of nondog species. It would be interesting to see if dogs could still distinguish themselves from their close ancestors in the case of wolves — of which dogs are actually considered a subspecies — or from slightly more distant ancestors like foxes, jackals or coyotes.

But these results do emphasize that dogs still have a remarkably all-encompassing view of what a dog looks like. If physical differences mattered more to a dog’s species recognition, that would raise the possibility that, in the wild, a dog might not recognize dogs of a different breed that looked radically different from them. That would make it less likely for two physically distinct breeds to mate. Over generations, that could lead toward reproductive isolation and the formation of new subspecies or even species branching off from dogs.

But for now, it looks as though dogs are likely to remain a single species. What researchers are probably going to look at next is what cues a dog uses to visually distinguish a Rottweiler from a rabbit or a pit bull from a person.