Making mealtime a challenge can be good for dogs

Working to get a meal is something dogs were born to do.

“If dogs were out in the wild they’d be spending most of their time hunting for food,” says trainer Joan Mayer of Santa Barbara, Calif.

But for many of our dogs, mealtime is over in a minute or two. Then what? They look for something else to do.

Unfortunately, when dogs are left to find their own entertainment, we aren’t usually pleased with their choices.

“They’re not going to sit down and turn on the TV,” says Mayer. “They’ll chew up the coach or bark all day.”

So ask many trainers how you should feed your dog, and they’ll say you’re wasting a golden opportunity by feeding out of a bowl.

At any pet store you’ll see balls, puzzles and other food-dispensing objects — the Kong is the most familiar. They’re often referred to with terms like “treat balls,” so some owners worry about weight gain from extra goodies if they use them. In fact, you can use these toys to feed your dog’s regular diet. If you feed dry kibble, just toss it in and you’re good to go. Or you can plug the hole of a Kong with canned food and freeze it for an even longer-lasting meal.

Feeding this way can help with a variety of behavior problems. For dog trainer Melissa Duffy of Carlsbad, Calif., food toys have helped her rat terrier, Dinky, with separation anxiety.

“She starts to get anxious when I am getting ready to go out, whining, pacing, shivering,” Duffy says. Being left with a food-dispensing toy calms her, and has longer-lasting effects as well.

“She also doesn’t get into the trash can, which she will do if I leave her without a treat-dispensing toy,” says Duffy. “I’ve also noticed that she isn’t as frantic when I come home, no matter how long I’ve been gone.”

Getting animals to use their natural behavior to get food is part of what zoos call “enrichment.” Rather than serving a bear out of a dish, say, keepers hide food so the animal has to search and dig as it would in the wild. This technique helps reduce stress-related behaviors like pacing.

It works for dogs too, as dog trainer and former zookeeper Stephanie DeGesero DeYoung of Abilene, Texas, showed in her master’s thesis, using the same research methodology used to evaluate enrichment techniques in zoos. She found that giving dogs a stuffed Kong reduced the number of stress behaviors observed, even after they were finished with it.

Tearing things apart is a basic instinct for a meat-eater, but when a dog gets that out of his system by digging breakfast and dinner out of a dispenser, he’ll feel less need to shred the furniture.

Some advice for dog owners who want to get started feeding their animals this way:

First, if you’ve got multiple dogs, separate them to prevent conflict. “I tell people, every dog owner should have a baby gate or two,” says DeYoung.

Second, some dogs need help at first, as trainer Kate Abbott of Vista, Calif., found the first time she gave a stuffed Kong to her Jack Russell, Qwill: “He was very interested, but after a few licks shrugged and went off to chase lizards.”

Abbott put food in a clear plastic water bottle so Qwill could see it, and then cut off the top so the food fell out easily.

“Each day, I cut a little bit less off the top, gradually making the opening a little smaller, a little harder.” she says. Qwill can now work the hardest puzzle toys on the market.

You can also try starting out with something especially tempting — say, bits of steak or chicken — and gradually mix in higher proportions of kibble till your dog is eating his normal rations out of the toy.

Food toys can also be made with items you already have at home. DeYoung suggests putting food in the cups of a muffin tin and covering them with tennis balls. And if you don’t mind a mess, you can put food in an empty cereal box, tape it shut, and cut a small hole so your dog gets a hint of what’s inside — a toy that may reveal the vicious carnivore inside the cutest little pup as he shreds it to pieces.

And that’s the other reason to do it, says Mayer: It’s like having your own private nature TV.

“It’s fun to watch them!” she says. “You really get to watch your dog use their natural instincts.” 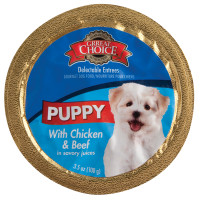 Q&A: Whats the name of this dog harness company?