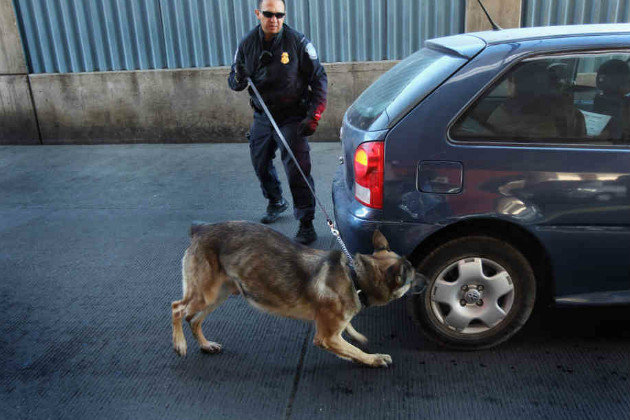 A detective provided his daughter with drug-sniffing dogs, like this one pictured here. (Getty)

In an early bid for Father of the Year, a Miami police detective allowed his 10-year-old daughter to use three drug-sniffing dogs and an ounce of cocaine for a science fair project, according to the Miami Herald.

Not surprisingly, she won. The first-place honor gave Emma an automatic entry into the Miami -Dade Elementary Schools Science Fair, where her drug-sniffing project earned an honorable mention.

“The purpose for this scientific investigation was to find which dog would find the cocaine fastest using it’s [sic] sense of smell,” the fourth grader wrote in the abstract for her project, entitled “Drug Sniffing Dogs.”

Bartelt, according to the Miami Herald, fellow detective William Pedraja and Sgt. Samantha Machado provided the dogs (a springer spaniel named Roger; Levi, a golden retriever; and Franky, a retired chocolate labrador), and the cocaine. (Franky showed he’s still got the touch, locating the illegal substance in 43 seconds.)

Emma’s mother, Michelle Bartelt, said the experiment was her daughter’s idea, and that Emma was under constant supervision and “did not touch the cocaine.”

“[Doug] handled the drugs,” she said. “He’s always very meticulous about how he handles drugs.”

John Schuster, a spokesman for the school district, issued a statement saying the project, while unusual, did not violate any of the science fair’s rules—and that cocaine is not a specifically banned substance.

“The student’s science project involved a very unusual set of circumstances, including having a parent who is a well-respected police detective with experience in training dogs that sniff for illegal substances,” Schuster’s statement read. “From our understanding, the parent was the only person involved in working directly with the dogs and the hidden substances, which took place at a police training facility.”

itunes.apple.com www.amazon.com www.cdbaby.com Calm music to play for your dog to entertain or keep it company while you are away. Beautiful instrumental songs mixed with nature sounds and people telling soothing stories about their dogs. Veterinarian and Animal Behaviorist approved! 1. Dog Days Of Summer 2. Happy To See You 3. Paws and Reflect 4. My Best Friend 5. Puppy Kisses 6. Wet Nose Wonder 7. Catching Some Zzzzs 8. Favorite Toy 9. A Warm Spot 10. Its a Dog’s Life 11. Chasing My Tail 12. Treat Tango 13. Musical Walk
Video Rating: 4 / 5