The dog that was rescued off the lake ice this past week was reunited with his owner. | Courtesy, Chicago Animal Care & Control

A young dog rescued from the ice of Jackson Harbor on the South Side earlier this week suffered no ill effects and has been reunited with its owner.

Chicago Police Marine Patrol officers rescued the black shepherd mix from the ice, after a 911 caller spotted it walking back and forth on the frozen lake Tuesday morning at the harbor in the 6700 block of South Shore Drive.

Officers spent a couple of hours trying to coax the dog back to shore, and were finally able to bring it in and tranquilize it, according to police Marine Patrol.

The dog, about 40 pounds and believed to be a year old, was placed in the care of city Animal Care & Control, where it spent the rest of the week prior to being reunited with its owner on Friday, according to Animal Care spokesman Bill McCaffrey.

The owner visited the shelter on one of its regular lost pet tours and found his dog, McCaffrey said. Shelter vets had given the dog a full exam, neutered him, updated his vaccinations and placed an identification microchip in animal, according to McCaffrey. The owner also purchased a current dog license.

The owner, who lived in the area, will be charged the cost of those services, about $ 100, he said. “It’s just like if you adopt a pet from the shelter. All stray dogs animals are neutered by ordinance.”

And while the owner “did not say how the dog got away,” he “assured shelter staff that he is taking steps to ensure his dog does not get loose again,” according to McCaffrey.

The owner has not been fined or ticketed, he said, but the investigation into how the animal got free is continuing.

McCaffrey said he was not sure if the owner, who declined to be publicly identified, had seen the dog on TV or was just looking for it.

“There was a lot of media interest in this one. Any time an animal is featured in the media it creates a lot of interest. But there are also a lot of other animals at the shelter that need homes,” he said. 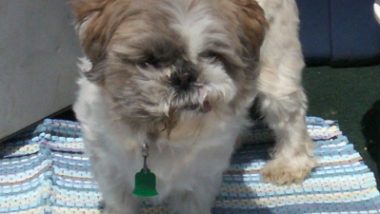