Stray dogs in Mexico are murder suspects in 5 deaths 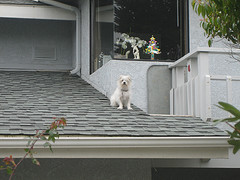 A 15-year-old girl is believed to be the fifth victim of a string of stray dog attacks in a Mexico City park over the last month, setting off a fierce debate about how to handle the city’s stray dog problem.

Prosecutors say the girl found fatally bitten in mid-December may actually be the first victim of the feral pack behind the killings.

Authorities began capturing dogs in the park this week after a mother and her infant boy were found dead and covered in dog bites on Dec. 29. A week later, the bodies of a teenage couple were found, also covered in fatal bites from as many as 10 dogs.

The four were believed to have been the only victims, until the mother of 15-year-old Ana Gabriela Nataret Ramirez told Milenio Television late Tuesday that their daughter had died in a hospital after being found covered with apparent dog bites near the Cerro de la Estrella park on the night of Dec. 16.

The city prosecutor’s office confirmed the details of the case Wednesday and said it was looking into whether her case was connected to the other deaths.

“An autopsy revealed that the victim had multiple injuries and puncture wounds on both arms,” the prosecutor’s office said. “After the events of recent days, the Mexico City district attorney’s office broadened the investigation and confirmed the possibility of a new case of homicide resulting from wounds caused by dogs.”

In addition to rabies, the dogs were tested for traces of human blood and DNA in order to determine if they were indeed involved in the killings. The rabies tests all came back negative, and the prosecutors’ office said the other tests were pending.

The borough is helping pay funeral costs for the victims and get psychological help for the relatives.

Many family members have expressed skepticism that dogs could have killed their loved ones, saying their injuries appeared too devastating to have been the result of dog bites.

Residents who live around the park and relatives of Samuel Martinez, a 16-year-old high school boy who was killed, refused to accept that dogs killed the youngest member of their family.

“It’s not logical. I mean the dogs are small, they are domestic dogs. We don’t believe what the prosecutor’s office is telling us,” brother Enrique Martinez told The Associated Press.

Martinez said police told the family the couple was perhaps carrying a fish fillet which alerted the dogs. He said identifying the body was a horrible experience for him and his loved ones.

Fatal mauling of humans by dogs are extremely rare, but Dr. Sophia Yin, executive board member of the American Veterinary Society of Animal Behavior, said they can happen, particularly when dogs that are used to being around people are moving in large groups, and people shout or run in fear when accosted by the animals.

“It’s hard to tell people, stand completely still and relax, don’t turn your back. Almost anything else you do can get the dog more excited,” Yin said. “The more animals involved, the higher the excitement is.”

Jose Luis Rodriguez, driver for a micro-bus service that travels through the park, said he had recently encountered a pack of 10 feral dogs that had growled at his father.

“There are a lot of dogs around here. We give them something to eat and they go away,” he said. “People come and throw their dogs away in the park, abandon them. There are too many dogs around.”

Valencia said that the borough planned to allow people to adopt any dogs not involved in the killings.

After authorities released photos of the captured dogs, activists started an online campaign protesting the animals’ innocence and calling for authorities not to euthanize them. Tens of thousands of dogs are euthanized each year in Mexico if they are captured by animal control officers and not claimed within 72 hours.

Many people re-posted the images of the dogs staring sadly from behind bars at an animal shelter, and the hashtag for the campaign briefly became the top trending topic on Twitter in Mexico.

Mexico City Mayor Miguel Angel Mancera said his government would launch a new program to spay and neuter dogs in order to reduce the number of animals in the street, sending 25 mobile surgical units to neighborhoods where residents would be encouraged to take advantage of free sterilization for their pets.

The Associated Press contributed to this report.