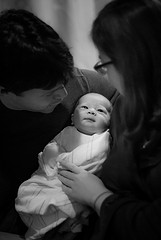 Terfel the dog and Pwditat the cat

Four years ago, a tomcat showed up at Judy Godfrey-Brown’s door in Anglesey, Wales, on a mission.

When the animal lover accepted the stray into her brood of cats and dogs, “he ignored everybody and went straight for my blind dog and started loving him,” she tells PEOPLE. “He realized something was different about the dog and [wanted to help].”

Now, the cat, named Pwditat, and Godfrey-Brown’s 8-year-old dog Terfel, are inseparable, and Pwditat has become the dog’s guide. The feline uses his paws to help lead the pooch – who lost his sight years ago to cataracts – outside on walks. Their sweet relationship was first reported by the Daily Post of North Wales.

“The cat came here because that cat knew there was something different about the dog,” Godfrey-Brown says, adding that because of her recent surgery the pair are living at a nearby cattery run by a local woman named Anne Cragg. “They sleep together in the same basket and go for walks. Why can’t people be as lovely as that?”