Dogs at the Pima Animal Care Center could soon be enjoying Puccini arias and Handel concertos from the comfort of their new shelter beds if local animal lovers contribute to PACC’s latest fundraiser.

PACC, in conjunction with its nonprofit foundation, PACC Partners, is raising money so the shelter can replace its aging pager system with a modern sound system that will pipe in classical music throughout the shelter’s kennels in an effort to mitigate the stress of a shelter stay.

Despite frequent opportunities for socializing and daily walks, shelter life can produce anxiety in animals. Living in unfamiliar surroundings and in confined spaces can take a toll on an animal’s psychological well-being, which is why it’s important to find ways to make the animal as comfortable as possible.

PACC shelter Manager Justin Gallick said other shelters have successfully used music for its calming effects, and he hopes it will prove beneficial to PACC’s animals as well.

“The shelter environment is a stressful environment for all involved, especially the dogs and cats. When they come in, there is high stress and they’re feeding off each other,” Gallick said.

Dogs relegated to shelter environments barked less and slept more when classical music was played, according to a study published in the Journal of Veterinary Behavior.

And less barking translates into an overall better environment for the animals, staff members and potential adopters.

“Hopefully with this, we are going to be able to control some of that stress, which, in turn, is going to make our pets more relaxed and more adoptable,” Gallick said.

For a local example of how music lessens stress in animals, we can look at the local Humane Society.

The Humane Society of Southern Arizona has been playing soothing music over the past 2 1/2 years for its animals.

And the results have been positive.

“In our experience, it has shown a major improvement in the dogs’ behavior,” said local Humane Society spokesperson Samantha Esquivel. “It really helped to keep them relaxed, and they weren’t becoming overstimulated. … Before, any sort of sound or even people walking through the kennels would get all of the dogs really stirred up, … (but) once we started using the music, they were just a lot more calm and started to sleep rather than bark.”

This fundraiser comes on the heels of PACC’s successful effort last October to provide elevated shelter beds for every kennel.

Gallick estimates it will cost $ 10,000 to implement the complete sound system.

And for this drive to duplicate the previous one’s success, PACC is hoping residents will find the time to donate this holiday season.

“If everyone chips in even a little, we can meet our goal of reducing anxiety and improving the environment for animals that are already going through a lot,” said Karyn Carlson of PACC Partners.

All adoption fees at the Pima Animal Care Center are $ 25 through Dec. 31.

Tillman the skateboarding bulldog from the iphone commercial. All clips are from January 2007. Tillman was a little over a year old at the time. A little history of this first video. I Filmed the video using a just purchased Panasonic Lumix TZ1. I was bicycling through Venice Beach California when I came upon the skateboarding dog. Originally the first video had the soundtrack “Giving In” by linkin Park. Once the video appeared in iphone commercials I removed the video from youtube because of the attention it was getting and I had no rights to use the song. As time approached for Apple’s release of the iphone with youtube, youtube contacted me and requested I reinstate the video without the soundtrack. Youtube wanted users to be able to view the skateboarding dog in the store and after purchasing their iphone. Unfortunately youtube gave me only a few hours to re-edited video before the iphone release. The original background sound on most of the clips was ruined by hysterical laughter from a woman watching Tillman so I cut and pasted sound in from other parts of the video to cover the laughter. That’s why some claim they hear the word eskimo over and over-lol. When the original video with the Linkin Park soundtrack was selected it had around 15000 views. 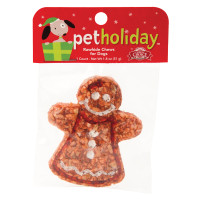 Encourage your dog to gnaw, chew and munch in a nondestructive way by offering one of these tasty Grreat Choice Rawhide Munchy Gingerbread Boy for Dogs. The natural-flavored rawhide treats in this gingerbread shape provide a festive, exciting variety for your dog’s taste buds, as well as the same classic rawhide texture that canines love to chew. A PetSmart exclusive. Ingredients: Rawhide, Rice Flour, FD&C Yellow #5, FD&C Yellow #6, FD&C Red # 40, FD&C Blue #1, Titanium Dioxide Advice for use: Supervise use. If your pet is unaccustomed to this product, serve in a limited amount initially. Intended as a treat, not food. Recommended size is slightly larger than pet your pet’s mouth. Wash hands with soap and warm water after handling. This product may stain. Caution: Excessive use of this product may cause gastric upset. Remove decorations before giving to your pet. Net Wt. 1.8 oz (51g) Made in China