Settlers standing outside a homestead probably in the Nerang area, 1872

Settlers standing outside a homestead probably in the Nerang area, 1872 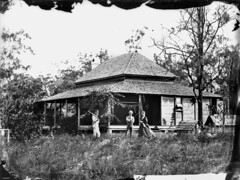 Description: The slab-built homestead pictured, with its wide-stepped shingle roof, may be the home of Captain Walter John Browne, his wife Thomasine, (the widow of the Rev. E. J. Cooper of Yorkshire) and her four children. In 1865, Browne had selected land from Bingarabah Crossing to Talai Crossing on the Nerang River and the 1871 census showed that 11 people were living on the property. Browne may be the man at far left, dressed in riding clothes and carrying a sportsman’s gun. Thomasine Browne is possibly the woman at right, wearing an impractically elegant velvet gown. If this identification is correct, then the third figure may be her son, Edward Cooper Jnr who later established Birribon at Nerang. The small shelters at far right were kennels for the gun-dogs. (Information taken from: D. Byrne, A Travelling photographer in colonial Queensland : the work of William Boag, 1994)

Visit www.thedogfolder.com for all information on dogs. Dog breeds puppy training all you need to know if you own a dog