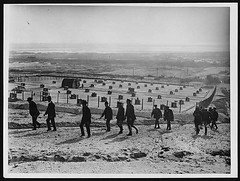 Image by National Library of Scotland
The value of war photography is not restricted to capturing the conditions and consequences of battles; it also records the more curious or obscure details of life during wartime. This is one such detail, a field of lines of individual kennels, each housing a messenger dog. From this photograph it appears that the dogs had more spacious living conditions than many of the men at the front.

Messenger dogs were found mainly at Battersea dogs home and trained initially at the War Dog Training School in Shoeburyness, England, before being taken to the main messenger dog kennels at Etaples, France. From there, dogs were allocated to sectional kennels behind the front lines. Each sectional kennel had on average 48 dogs and 16 handlers.

What are or where can I find some patterns for making dog clothes ?