Dog delivering a message, a shell hole being used as a temporary post

Dog delivering a message, a shell hole being used as a temporary post 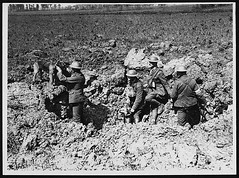 Image by National Library of Scotland
Messenger dog bringing a message to soldiers in a shell hole in France, during World War I. A dog-handler unfastening the collar of a messenger dog, so as to read the message that has been sent to his unit. Scrolled up messages placed inside waterproof containers would have been attached to the dogs collar, as it moved between units in the front line trenches.

Messenger dogs were recruited by the British Army from the famous Battersea Dogs’ Home in London. The dogs were then taken to The War Dog Training School in Shoeburyness in England to be trained. Once their initial training was complete, the dogs then received a foreign posting to kennels at Etaples in France. After completing their training at Etaples, the dogs were transported to kennels close to the front line, where they would be allocated to individual regiments for active service.

[Original reads: ‘WESTERN FRONT IN FRANCE. A dog delivering a message, a shell hole being used as a temporary post.’]