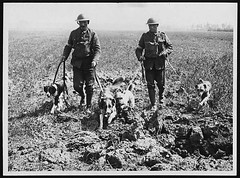 Image by National Library of Scotland
Messenger dogs and their handlers marching to the Front, in France, during World War I. Straining at the leash, these messenger dogs and their keepers are apparently on their way to the front line trenches. In addition to carrying messages, these dogs probably performed a wide range of important tasks, including sentry duty, acting as decoys, ambulance duties and killing vermin. Keeping a pet also helped to raise the morale of the soldiers, by adding a touch of domestic home life to the trench.

The British army recruited its messenger dogs from the famous Battersea Dogs’ Home in London, then trained them for active service at The War Dog Training School in Shoeburyness, England. After their initial training was complete, the dogs then received an overseas posting to kennels at Etaples in France. From Etaples, the dogs were posted to kennels behind the front line on the Western Front, where they would be stationed with individual regiments for active service.

[Original reads: ‘OFFICIAL PHOTOGRAPH TAKEN ON THE BRITISH WESTERN FRONT IN FRANCE. Messenger dogs with their keepers going across country up to the front line.’]