Getting to Know Your Bulldog

Originating in England, the Bulldog has an unmistakable face. Although the Bulldog is often called other things to include the British Bulldog or English Bulldog, they are all the same breed. This particular breed can be dated back to around the early 16th century. By the 17th century, this breed was used as bull bait, a barbaric form of death through suffocation for the bull. Because of its brutality, this use of the Bulldog was outlawed in 1835. The result of this ban was a large reduction in the number of Bulldogs people owned.

Today, the Bulldog is a great family pet, gentle, yet very protective. If you want a dog that is easy to care for, one great with kids, and one with an excellent personality, the Bulldog should be a consideration. With a frowning face and powerful looking body, this particular breed is often
overlooked, which is a real shame because it makes an excellent family pet.

Even though the Bulldog is more on the small side, it is very stocky with a powerful and proud stance. For instance, an adult dog could weigh between 40 and 50 pounds with a height between 12 and 14 inches. Because the body is short and compact, it waddles when it walks. The muzzle is extremely short with saggy skin on the face. All Bulldogs have a short, smooth coat but colors vary.

Unfortunately, the Bulldog has been wrongly labeled over the years as being a ferocious beast but in truth, this breed is amazing gentle with adults and children. In most cases, the
Bulldog gets along well with other animals but early socialization is recommended. Sometimes, you may see a little bit of stubbornness and protectiveness out of your dog but at heart, the Bulldog love to play and is rather friendly.

Due to the flat face and short muzzle, the Bulldog is prone to breathing problems, particularly

during hot weather. Some dogs have trouble with the palate, which can collapse, cutting off a good air supply. The good news is that if your dog should experience this problem, it can be fixed with minor surgery. While a collapsed palate is not a physical emergency, if not corrected, you would notice loud breathing and snoring.

Another important factor associated with owning a Bulldog is that because of the body structure, it cannot swim well. Therefore, if you have a swimming pool or live near a pond or lake, you want to take extreme care. Keep in mind that this breed has a large head in proportion to the body. For this reason, giving birth is difficult, which is usually why puppies will be delivered via Cesarean section. Finally, Bulldogs can also experience cataracts, cherry eye, allergies, and problems with the joints, specifically the hips.

About The Author: Daniel Stevens is the renowned dog trainer and author of SitStayFetch, a leading dog training guide having sold over 21,000 copies. See kingdomofpets.com/bulldog for more on dog breeds.

Get ready for your daily dose of cuteness overload. It doesn’t get much more adorable than this – an English bulldog puppy

How to Treat Dogs with Insect Stings 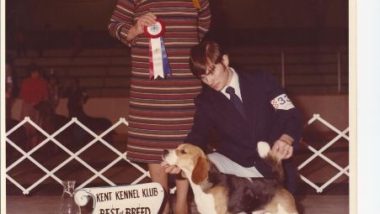